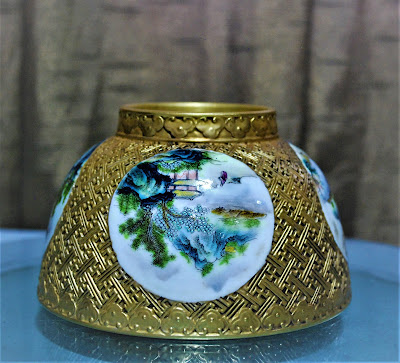 1. Examine decoration.
Chinese-taste pieces created for domestic consumption are almost always decorated with Chinese motifs, such as flowers, landscapes, Buddhist emblems and so on. Those bound for the West often incorporate Western themes or designs, which the artists would have received from foreign traders.

2. Chinese-taste motifs.
The dragon, which symbolises imperial power, is one of the most frequent motifs in Chinese porcelains. ‘It is a symbol of the emperor and one of the most sought after decorations for today’s Chinese collectors.

The imperial dragon appears on the finest of porcelains created for the emperor, which also bear imperial reign marks. Eventually, the dragon became an enduring motif and appears on a variety of wares, including imperial, domestic and export.
Pieces can range in value: ‘Much depends on rarity, condition, and provenance,’ says Gristina. ‘There are definitely affordable imperial pieces that are perfectly authentic and available to the new collector.

3. Take a look at transitional wares.
Traditionally a Western collecting category, porcelains made in the period between the Ming and Qing dynasties, known as ‘Transitional’ wares, are gaining popularity with Chinese collectors.
The kilns in China were not under imperial control at the time, so the painters and artisans had greater artistic freedom. You find a lot of interesting designs and some beautifully painted landscapes during that time period.

4. Consider hybrid porcelains.
There are also hybrid pieces, which blur the boundaries between domestic and export works. Made in the early 18th century, these objects reflect Chinese tastes but were sold to both domestic and export markets. At this point in history, before private European orders were common, demand in Europe for Chinese porcelains was great, and Western trading companies brought back porcelains decorated with Chinese motifs for a demanding clientele.

5. Porcelain objects for the scholar.
Another interesting sub-category of Chinese porcelains to consider includes pieces that would have adorned scholars’ desks: small brushpots, objects upon which brushes rested, flower vases and more. These pieces were made in a range of materials, such as wood and enamel, and also in porcelain.

6. Do your homework.
As is always the case, new collectors should strive to see as many works as they can, and get their hands on any and every material that they can from museums, auction houses, and dealers.

7. Look for restorations.
In the past, restorations tend to brown or yellow and flake with time, but new techniques make restorations harder to see. One trick to uncover restorations is to stick a pin in the questionable area; if it sticks be wary. Porcelain that has not been overpainted will not scratch. Holding a flashlight up to a work can also help with spotting hair-line cracks.


https://www.christies.com/features/Chinese-porcelain-Collecting-guide-7781-1.aspx
Posted by May Naik at 01:40 No comments:


The period from the 1950s to the ’70s saw the beginning of Hong Kong’s economic miracle. The blow dealt to the city’s post-second-world-war recovery by the Korean conflict and the consequent American-led blockade on Chinese trade was ameliorated by an influx of people from China who brought fresh capital and built factories, reducing the city’s reliance on the entre­pôt trade.
The antiques business flourished in this environ­ment and the market was dominated by dealers from China who moved to Hong Kong to escape the political and econo­mic turmoil after the Communist Party took over.
The field widened in the late 1960s, when Hong Kong began to attract more international collectors. Western deal­ers such as Hugh Moss and Glenn and Lucille Vessa, of Honeychurch Antiques, began to trade in the city. Holly­wood Road started to fill with antiques shops catering to expatriates and visitors, initially from America and Europe, later from Japan and Taiwan. In 1973, Sotheby’s became the first international auction house to hold regular sales in Hong Kong.
The dealers in Hong Kong often returned to [China] and bought from the antiques market in Beijing’s Liulichang district or from dealers who kept stock at home.”
There were restrictions, though.
“Nothing as old as Han [206BC-AD220] and Tang [AD618-907] dynasty was allowed to be taken out but Qing [1644-1911] and Ming [1368-1644] stuff, no problem,” says Hei Snr. “Even imperial kiln ceramics could be exported.”
Hong Kong dealers continued to source from China during the turmoil of the Cultural Revolution.
Nevertheless, the mood is gloomy along Hollywood Road, where Andy Hei has had his own furniture shop since 2000. Last summer, Honeychurch Antiques became the latest of many dealerships to close their doors for good. Rising rent is the main cause. In the ’80s, the average monthly rent was HK$10,000. By 2000, Andy Hei was paying about HK$30,000. And then the market went berserk.
In some ways, the industry has also become a victim of its own success. “It is hard for anyone to set up a new business unless they come from a family of dealers with an existing inventory. It costs so much to buy now, and there are so many fakes out there,” Andy Hei says.
The market has changed dramatically in other ways.
“The old clients have gone along with the generous housing allowances that expatriates used to get,” he says. “Westerners also don’t have the same romantic idea about ‘the Orient’ that used to spur Europeans and Americans to study, collect and live with Chinese antiques. Buyers [from China] have different tastes and ways of doing business.“They bargain. They are impatient. They phone you up at midnight on a Sunday.”


http://www.scmp.com/magazines/post-magazine/long-reads/article/2127782/chinese-dealers-who-made-hong-kong-antiques-trade
Posted by May Naik at 03:17 No comments: